Southern Stars Netball Club is an incorporated, non-profit netball club with a focus on player development.

As a club we support the development of players, coaches and umpires. 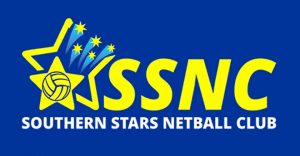 Southern Stars Netball Club aims to provide a supportive and fun environment for enthusiastic netball players of all skill levels.

Southern Stars have a focus on teams selected through trials and pride ourselves on running an effective and efficient club, supported by both our committee and members.

We welcome new players to the club and look forward to the 2022 season.